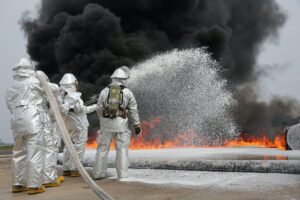 Have you been approached by the EPA (Environmental Protection Agency) and asked about the foam on your premises specifically the AFFF (Aqueous Film Forming Foam) used for fire fighting purposes.

The reason for this is that EPA has set groundwater and drinking water health advisory levels for only two compounds: PFOS and PFOA, the eight-carbon molecules that have been used in nonstick products, as well as fire fighting foam.

PFAS is the abbreviation for per- and polyfluoroalkylated substances which are organic chemicals containing carbon-fluorine bonds. PFAS chemistry was discovered in the late 1930s and these substances have been widely manufactured and used around the world since the 1950s.

PFAS have been used in industrial and consumer applications since the 1950s owing to their physical and chemical properties which impart friction reduction, surfactant abilities, repellence against oil and water as well as chemical and thermal stability in products to which they are added. The result is that PFAS are used in many sectors including the semiconductor, aerospace, automotive, medical, construction, and electronics industries. PFAS are common in everyday consumer products such as outdoor equipment, food packaging, carpets, clothing, furniture, cleaning products, paints, cosmetics and fire retardants.

The Stockholm Convention on Persistent Organic Pollutants (POPs) 7 was adopted in 2001 and came into force in 2004. This global treaty requires its parties to take measures to eliminate or reduce the release of POPs into the environment.

The POPs and resulting actions for the Parties are categorised under three annexes:

The range of PFAS substances includes some 4,700 chemicals.

1 The terms AFFF and fire fighting foams are used interchangeably in this report
2 Technical and Regulatory Guidance: Per- and Polyfluoroalkyl Substances (PFAS). The Interstate Technology and Regulatory Council,

The highly stable chemical bonds between carbon and fluorine atoms in PFAS means that they are highly resistant to degradation and in turn highly persistent within the environment. Consequently, as long as PFAS continue to be released to the environment, humans and other ecosystems will be exposed to higher concentrations of PFAS as they will accumulate in the environment. Even if all releases of PFAS would cease immediately, they would continue to be present in the environment, and humans, for generations to come3
.
PFAS are divided into polymeric and non-polymeric substances. PFAS found in AFFF are typically nonpolymeric, of which there are four groups:

Most PFAS found in fire fighting foams (FFF) are PFAAs of which two important groups are perfluoroalkyl
carboxylic acids (PFCAs) and perfluoroalkane sulfonic acids (PFSAs). In the lates 1990’s it was discovered there were issues with AFFF Perfluorooctanoic acid (PFOA); known as “C8” Chemistry, in the manufacture of firefighting foam which, effectively, comes into force on 1 January 2023.

The legislation relates to any substance that can degrade to produce PFOA. “Long chain’ C8 fluorinated Firefighting foam is one of those. The use of PFOA, its salts and PFOA-related compounds shall be allowed in fire-fighting foam for Class B fires already installed, until 4th July 2025, subject to the following conditions:

a. Fire-fighting foam that contains or may contain PFOA, its salts and/or PFOA-related compounds shall not be used for training.

b. Fire-fighting foam that contains or may contain PFOA, its salts and/or PFOA-related compounds shall not be used for testing unless all releases are contained.

c. As from 1 January 2023, uses of fire-fighting foam that contains or may contain PFOA, its salts and/or PFOA-related compounds shall only be allowed in sites where all releases can be contained.

d. Fire-fighting foam stockpiles that contain or may contain PFOA, its salts and/or PFOA-related compounds shall be managed in accordance with Article 5.

Note: At the time of writing, two possible future restrictions are being considered by the European Chemicals Agency (ECHA). They relate to (a) PFHxA and (b) per- and polyfluoroalkyl carbon-chain molecules (PFAS); both of which are used in the current range of extinguishers. Evidence has been submitted during the consultation period which has now concluded. Recommendations will be submitted to legislators in 2022 with any requirements being laid down in 2023/24 along with a transition timetable.